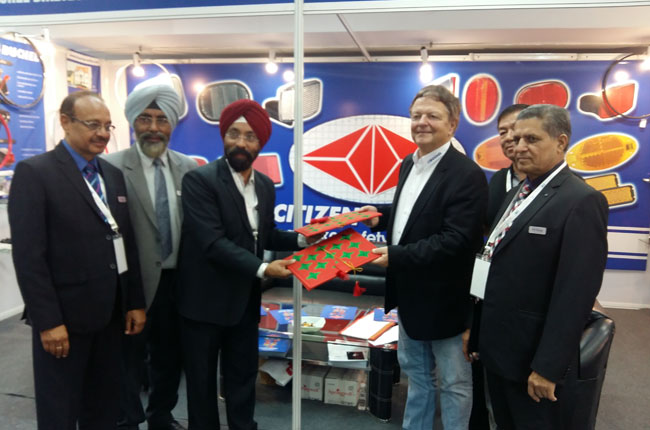 The 50:50 JV with Citizen in signed in October and start with production of bicycle reflectors.  The venture would further expand range to jointly produce spokes, nipples, alloy rims, plastic mudguards.

Erhard Büchel, CEO, Büchel Industrie-Holding GmbH & Co said, “The JV will tap the demand from OEMs and aftermarket after the Indian government regulation on installing new type of reflectors as per ISO standards.”

He was attending two-day Asia Bicycle Alliance (ABA) Conference in Chandigarh. Büchel is also showcasing along with Citizen at the bicycle show ExCon organized with ABA.

Indian partner Manjinder Singh, Managing Director, Citizen Press Components informed, “We are investing around INR 100 million (about US$ 2.5 million) in the joint venture.”

The production of reflectors would likely commence in the first quarter of 2017.

Indian bicycle industry is gearing-up to manufacture new type of reflectors by bringing latest technology in line with government’s direction of installing ISO Certified reflectors. Supreme Court committee on road safety has made mandatory to install set of 10 reflectors with ISO 6742-2 on the bicycle i.e. four on pedals, two on front and rear wheel each, one on lamp bracket and on rear mudguard.

Büchel has five plants in Germany, three in China & one in Belgium.